If you follow any of my other social media accounts, you've probably seen the odd post documenting my moderately successful mission to teach myself to paint. Through video tutorials and good old trial and error, I've managed to create a few pieces that I'm not ashamed to hang on my wall. 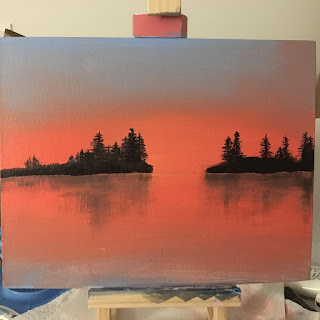 I won't be selling art at the farmer's market or making my own tutorial videos any time soon, but I'm happy with the results, and I'm optimistic that I'll get better, if nothing else because of sheer stubbornness.

Throughout this little adventure, I've found my thought process very familiar. Specifically, I think a lot of things that I thought during my early days as a writer:


What if I mess this up?

What if I do all this work, and it's trash?

What if everyone hates it?

I've been writing professionally for over a decade, so I've conditioned myself to respond to those doubt gremlins the same way every time:


So the hell what?

Because I have messed up stories. Plenty of them. Even now, almost 200 books into my career, my editors still have their work cut out for them because I can still torpedo a perfectly good story. But I write them anyway because I know that I have editors who will help me course correct, and I know I can course correct. Knowing I have people who can help and that I am capable of fixing problems, I'm willing to take bigger risks and write more intimidating books than I might have when I was first starting out.

Sometimes it's just a matter of making a few tweaks here and there. A character's lack of motivation can sometimes be solved by a handful of throwaway lines sprinkled throughout.

Sometimes it's the literary equivalent of scraping off the paint, priming over the canvas, and starting over from scratch. I have rewritten multiple books almost from the ground up during the editing process.  Almost 90% of The Tide of War was scrapped and rewritten after my editor's first round. A Chip in His Shoulder was eviscerated, and barely recognizable from the original once it went through edits. With the Band and Not Safe For Work were both written twice from start to finish before I got it right on the third drafts, and even then they still went through a ton of editing before they were fit for human consumption.

Which is to say, it's 100% okay to mess up your story, because you can always fix it.

One more time for the people in the back:

It's 100% okay to mess up your story, because you can always fix it.

You can either fix it as is, or rewrite it and make it better, but you don't lose the right to that story just because it didn't come out perfectly on the first go around.

Just like right now, when I paint a landscape and then realize it can't be salvaged, all isn't lost. I now know a few things that don't work, and during the second attempt, I can practice and refine the things that did work. The second version won't be identical to the first, but it'll be closer to what I wanted the first to be. If I mess up the second time, then the third version will get me closer. And sometimes, I'll realize some element needs to be dramatically different. Not because I lack the skill level to paint a mountain or because my evergreen trees need work, but because the mountain borked the composition or the trees were better off being deciduous. Trial and error, all the way -- both because the skill level improves with practice, and because some elements work and some don't. Maybe the first painting was better suited to line a bird cage, but the effort wasn't wasted because that version was a step toward the improved final painting.

Books are much the same way.

And sometimes you might finish the story and realize that particular story isn't worth making into something readable. That's okay!I wrote my very first book three times from top to bottom, with each manuscript clocking in around 130,000 words. Which book is it? One that will never see the light of day.

Was that a waste of time and effort? Not at all. Because I learned to write with that book. It was a lot of trial and a whole lot of error, and in the end, I realized that at its core, the story wasn't as good as I wanted it to be. Maybe someday I'll revisit it and write it with the knowledge and skills I have now, but I'm happy to let it be, and I don't think it was a waste because I learned so much from it.

It was like trying and failing to create the same painting a dozen times in a row. Maybe I never got the cool painting I imagined, but I did learn a ton about brush techniques, shading, lighting, perspective, tone, value, mixing paints. That painting never came to fruition, but everything that went into it and the skills I got out of it will benefit every painting that comes after.

All of this is to say that if you're a writer -- or a painter, or a sculptor, or what have you -- don't let the fear of screwing up keep you from taking risks.

Put the words on the screen.

Put the paint on the canvas.

Screw it up. Ruin it. Make a mess.

Create something that you will never put on Amazon or Instagram.

It's that old adage that goes around during NaNoWriMo: Give yourself permission to write crap.

It doesn't mean deliberately produce garbage or don't concern yourself with quality.

It means give yourself permission to do scary things that you may not yet possess the skills to execute.

It means give yourself permission to aim high and -- this is the important part -- fail without being a failure.

If you do fail, scrape off the paint or cross out the words and try again. You'll get there!

And when you give yourself permission to mess up and let go of the fear that you won't get it right the first time,  you might surprise yourself sometimes.

Not long ago, I wanted to try one of Bob Ross's techniques for painting the Northern Lights. It looked easy on the tutorial, but I figured it was going to be hard in practice. Before I'd even primed the canvas, I made peace with the fact that this could turn out to be garbage. If I did, well, I'd just prime over the top and try again, and eventually I'd get it right. And I used a small canvas panel so at least I wouldn't be wasting one of the bigger, more expensive canvases.

This is the result: 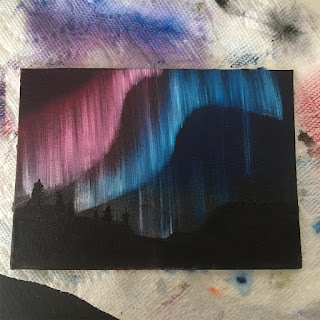 Is it perfect? No. But considering it was something I'd never tried before, I was pleasantly surprised. After a little more practice, I used a bigger canvas, and now this is hanging on my living room wall: 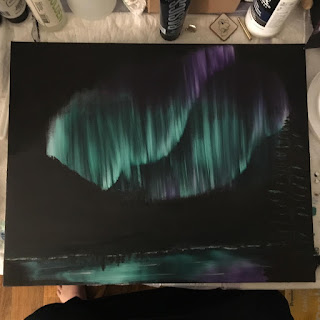 Turned out the Northern Lights are pretty easy. A few other things have proven to be a lot harder.
Painting mountains is apparently going to be like writing car chase scenes for me: haaaaard. Case in point, this little number, where I managed to achieve the basic shape of mountains, only to botch them during an attempt at adding snow. And then after scraping off the excess paint so I could try again, I wiped off the palette knife with a paper towel, only to drop the paper towel wet-paint-side down onto the canvas, and... well: 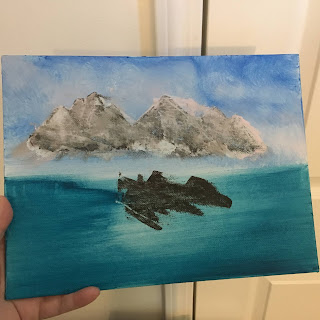 With any kind of art: some things are surprisingly easy if you can get past the fear of messing up. Other things are hard, but again, if you get past that fear, you can practice enough to get them right.

So to all the aspiring writers and artists out there, go forth and screw up.

Fear of failure is a much greater obstacle than failure itself, and if you can shake off that fear, then you can make messes that eventually give you the skills to make art, and you can surprise yourself by how easy some things are once you stop second-guessing your abilities.

And if you're looking at other writers and artists, and you're wondering why they never mess up while you keep making mistakes, remember that as some meme or another once pointed out, you shouldn't compare your uncut footage to someone else's final shot. Just because you don't see the mistakes doesn't mean they aren't happening.

This is actually why I love voice actors and musicians who post blooper reels, authors who tweet about their "typo of the day," and artists who show pictures of their mistakes. It's a reminder that no one is effortlessly producing flawless art, and that mistakes and corrections are part of every artists' process.

One of my favorite Instagram accounts is @minkstudiosllc, where equine sculptor Sarah Minkiewicz-Breunig documents her sculptures in progress. She frequently posts pictures where she made a mistake, followed by detailed descriptions and close-up photos of how she fixed it so other sculptors can learn how to spot and repair similar problems.

In the Ferrajunkies Facebook group, Michael Ferraiuolo occasionally posts blooper reels from his audiobooks, which are both hilariously funny and a great reminder that even a seasoned voice actor is going to stumble over a word or phrase now and then.

Sarah's finished sculptures and Michael's finished audiobooks are spectacular. To look at or listen to their work, you'd never guess either of them knew what a mistake was because their work is that good. But they both post evidence to the contrary, which should be a reminder to the aspiring artist to keep that in mind that the people who've been at it longer than you are still making mistakes, even if you don't see them.

Go forth and create.

Make mistakes so you can make art.

Aim high while giving yourself permission to fail without being a failure.

Another round of freebies

Since we're all still isolated and everything is still stressful... here's some more free books!

(books marked with * are also available in audio)

A Chip in His Shoulder*
https://www.amazon.com/dp/B07RC7QXTW

If The Seas Catch Fire*
https://www.amazon.com/If-Seas-Catch-Fire-Witt-ebook/dp/B01920EWNY

The Closer You Get*
https://www.amazon.com/dp/B06XKQX9S2

(books marked with * are also available in audio)

The Master Will Appear *
https://www.amazon.com/dp/B06XSQCTS1

Blood From a Stoner *
https://www.amazon.com/gp/product/B07D7F57HF

All The King’s Horses *
https://www.amazon.com/dp/B06XNQ1WL3

Free books for a limited time!

Since a lot of people are social distancing and self-isolating right now, I've put several of my titles up for free through March 18th for those looking to stave off cabin fever with something to read:

(Those marked with * are also available in audio)

The Tide of War
https://www.amazon.com/gp/product/B07RC59MMJ

I’ll Show You Mine
https://www.amazon.com/gp/product/B06XNV2LBB

The Walls of Troy *
https://www.amazon.com/Walls-Troy-L-Witt-ebook/dp/B06XNZL6FM

At the Corner of Rock Bottom & Nowhere *
https://www.amazon.com/dp/B06XBG4SR2