The Madness of My Method

On forums such as Absolute Write, a frequent question that crops up is "can I do it this way?" Writing out of sequence, longhand vs typing, etc. In other words: "If I do things in some off-the-beaten-path way, am I doing it wrong?"

The slightly longer answer is, "As long as you finish what you write, then no, you're not doing it wrong."

And I say this as someone who, when it comes to oddball writing methods, stops just short of doing my work while suspended upside down above a tank full of sharks. So, for those who want some reassurance that it's okay to do things your own way, I thought it would be fun to share some of the methods (and madness) of my writing and give a little peek at what goes on behind the scenes here.

Over the last couple of years, I've evolved from typing only to doing some longhand. It started with jotting the occasional paragraph in a spiral notebook. Sometimes, when I couldn't figure out how to word something, writing it by hand would help untangle the brain knots.

I also write out of sequence. Like, way out of sequence. It started out with writing a chapter, then skipping around on the outline, writing and finishing this chapter, then that one, etc. Then I started working on multiple chapters at once. It wasn't unusual to have four or five chapters in progress. With time, it got to the point I'd have every single chapter in the outline started, but I'd be 20,000 words in before I actually finished one. As an example: As I write this blog entry, I'm 41,000 words into The Closer You Get. Out of 23 chapters, 8 are done and all but 2 are started.

These days, I also tend to write chapters in fragments. It's not like those started-not-finished chapters are written in any kind of linear fashion. A few paragraphs here, a few lines there, with a bunch of gaps in between. Then I fill in the gaps, and eventually, it all blends together to form a cohesive scene.

For some reason, though, it's often easier to fill in those gaps by hand instead of typing. So, I'll print out a few not-quite-done scenes. Bearing in mind I print single-spaced, a page generally looks something like this: 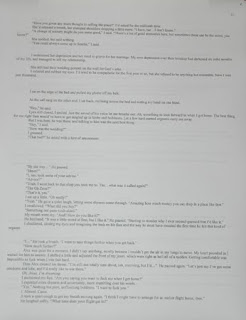 All those gaps between paragraphs? Yeah. Those all need to be filled in. The filling can be anything from an arrow connecting the two (when I realize they don't need anything in between) to 1,000 words or more of new material. Just depends on what's going on, what's missing, etc.

I take my pages, my trusty clipboard, and curl up on the couch, go to the beach, hang out in a restaurant, whatever...and start writing. Sometimes it's just pieces of dialogue, sometimes detailed descriptions or actions, sometimes just a note to myself ("go from ceremony to reception; note summer heat + wearing tuxedo" or "brief flashback to scene in chapter 3"). I'm not really after any kind of perfect form or prose at this point, so it's usually half "good stuff" and half "crap that needs to be polished a wee bit when I type it up".

In a few hours, I have a stack of pages that look a little something like this: 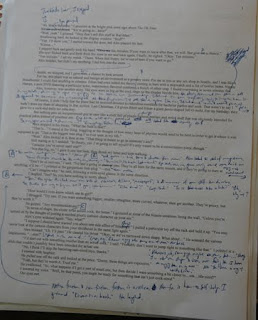 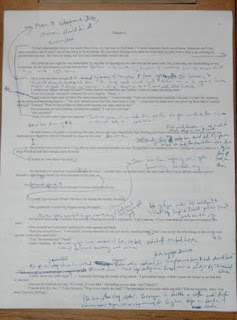 And what happens if I need more space than what's on the page?

Flip it over, of course. 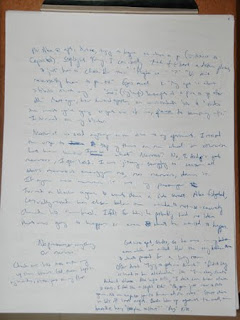 Yes, my handwriting really is that bad. Don't judge me.

Once all the pages are duly scribbled upon, it's back to the computer to type it up. You would think this would be incredibly time-consuming and labor-intensive. Double the work to hit my word count quota, right? For whatever reason, doing it this way, I can knock out my daily goal of 5,000 words in much less time. I really don't know why, it just works for me, and has for the last dozen or so books.

So, the moral to the story: It doesn't matter how you write it. By hand? Typing? Linear? Non-linear? Backwards? Suspended upside down above a shark tank? Do whatever you need to do.

Email ThisBlogThis!Share to TwitterShare to FacebookShare to Pinterest
Labels: The Closer You Get, writing methods