Pimping out a new release from my good friend M Jules Aedin, Lovegames, which is now available from Loose Id, LLC: (Also available on AllRomance) 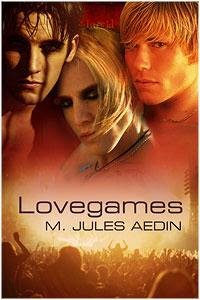 Adam and Keith like playing bedroom games -- and hot tub games and elevator games and backstage-at-a-concert games -- and they really like inviting other people to play with them. But when they both get a little more attached to Sebastian than they intended to, the rules of the game change.

Sebastian is just a journalism major trying to take control of his life when his plans get blown out of the water by a surprise one-night-stand with his favorite actor and the actor’s rock star boyfriend. What should have just been a great party story turns into an emotional entanglement that shakes his world, and he’s not prepared for the spotlight or what’s hiding in the shadows it casts.