Walking, Talking, and a Whole Lot of Leather: The Chicagoland Shenanigans

The trip began in a benign, stress-free manner. My trusty Ford Exploder whisked me across Iowa and part of Illinois without incident, which is extra surprising when you consider that a) I drive like a bat out of hell and b) I'm reasonably certain every Iowa state trooper was on I-80 that day. I even had change handy for the copious amounts of toll booths when I crossed into Illinois, and managed to eat my lunch without getting crumbs all over myself or the interstate. So everything was off to a good start.

Not long after I made it into Chicago, my GPS advised me to get off the freeway and begin a series of turns. This is normal, of course. The turns were turned and the directions were followed, and lo and behold I found myself...

...not where I wanted to be. What the hell? I pulled over at the exact address where my hotel allegedly stood, except there wasn't a hotel in sight. And even if there was, I sure as hell wasn't staying in this particular neighborhood. And I've lived in a bad neighborhood in Norfolk, VA, so that says something.

Anyway, after a few moments of confusion, I looked up the address again and discovered, to my horror, where I went wrong. You see, I had put the address in the Notepad app on my iPhone. Turns out, if you tap an address in the Notepad app, it'll take you straight into the GPS app, and tell you how to get there. Wonderful...except when autocorrect changes "Monroe" to "Madison" and lands you about 15 miles away from your destination. 15 miles isn't too bad, but let me tell you, when you've been driving for almost 7 hours, the prospect of getting back on the road and straight into afternoon traffic in downtown Chicago is...less than thrilling.

Especially when there's an Occupy rally going on... 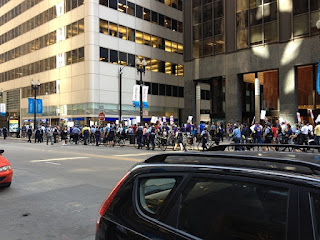 Some additional shenanigans ensued before I finally checked into my hotel, but I made it at last. Shortly after that, I was joined by my roommates: Sarah Frantz  (formerly of Dear Author) and Annabel Joseph (click on Annabel's name for her recap of the trip).  Annabel is a very sweet and funny author, and Sarah is not nearly as terrifying in person as I thought she'd be. Kind of makes me feel silly for packing the garlic and crucifixes, but one can never be too careful.

Now, you're probably asking yourself, "Okay, but why the hell were you in Chicago to begin with? Especially with such shady individuals?"  I asked myself the same thing at the time, but then my long term memory kicked in and I remembered there was actually a reason for me to be there. Funny how that works.

That reason? The CARAS research conference at the Adler School of Psychology.  This was a conference for therapists, social workers, psychologists, etc., to educate them to be kink-aware and kink-friendly. Sarah invited Annabel and me, as well as authors Heidi Cullinan, James Buchanan, and Edmond Manning, to speak on a panel about positive and realistic portrayals of BDSM in romantic fiction. The panel went swimmingly, and hopefully there will be a link to the original webcast that I can post in the future, but for now you'll just have to take my word for it that the six of us worked fabulously together, the audience had some great questions, and I managed to keep my swearing to a minimum.

From there we went to lunch. For the life of me I can't remember the name of the place, but it was one of those pizza/sandwich/pasta/soup/kitchen sink places, and the food was great. "The food was great" seems to be a theme in Chicago, so I'll refrain from repeating it at every mention of dining establishments. Just assume unless otherwise noted that the food was awesome. Anyway, where was I? Oh yes. So you take six people who've just given a panel on all things good and kinky, and stick them at a table in a public place. What do you get? Strange looks from other restaurant patrons.

As it turned out, this was the very same day that another Lambda finalist reading was occurring, this time in Chicago. My fellow panelists were fabulously supportive and came to the reading, which was awesome. Of course we had to kill some time between the panel and the reading. Naturally, we (and in this case I mean James, Edmond, and I, since we were driving together) killed time by hunkering down at a Panera to do some writing. Duh. It should be noted here that when the cashier tried to hand me my sugar-laden pastry of choice, Edmond valiantly attempted to intervene and thus save the city from me turning into a cracked out squirrel for the afternoon. He was unsuccessful, but his attempt was noteworthy nonetheless.

It was they day after the panel and the reading that things got really interesting. I had planned to hole up in the room for the day and write, but you see, I very much live my life in the spirit of carpe diem. For me, that means I don't pass up potentially awesome and interesting experiences unless there is absolutely no way I can do it. So when Sarah and James say, "We're invited to a leather bar to watch a bondage demonstration, wanna go?", there is only one correct answer, and that answer is, "I'll get my shoes."

On the way out, we stopped by James's hotel room to pick something up, and I feel compelled to say this: While I can appreciate the decorating tastes of The Rainforest Cafe, and I understand the need to draw customers in, etc., I am inclined to think that when one is building a place of business across the street from a hotel, perhaps this is not the best thing to have said hotel's guests see when they look out their windows: 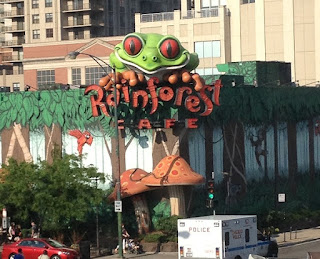 Moving right along, there's no sense going to a bondage demonstration at a leather bar on an empty stomach, though, so we first went to dinner, this time at a Brazilian steakhouse. The food was amazing, blah blah blah, but the main reason I felt that meal worth mentioning is my undying amusement about the waiter who thought ice cream was an ideal dessert solution for a lactose intolerant diner.

After dining lavishly on meat, more meat, alcohol, additional meat, and some fabulous flan (for those of us who are tolerant of lactose), we hopped aboard ye olde L train and went...I guess north. My sense of direction isn't so great, and I spent most of the weekend having absolutely zero clue where I was and even less of a clue where I was going. So I just followed James and Sarah.

Obviously, they knew where they were going, because before long, we were darkening the doorway of the leather bar. And here, my friends, is where the dirty-minded, pervy, kink-writing author of this blog had one hell of a Dorothy moment, because oh my Lord, we were not in Kansas anymore. And that's all I'll say about that.

But the leather bar was only the beginning! A warm-up, if you will. Why? Because this was the weekend of International Mr. Leather. (I'm sure I don't have to mention it, but just in case: that link is NSFW) So, on Saturday, Sarah, James, and I went to the IML vendor fair.


It was certainly an experience, I assure you. I have never seen more leather, shoulders, asses, and general eyecandy than I did while walking the crowded halls between vendor booths. The smells of leather, rubber, and a hint of sweat weren't overpowering, but they were definitely there. I remember musing at one point that if ever there was a poorly-ventilated store between a saddle shop and a motorcycle shop, this is probably what it would smell like. Not unpleasant, mind you, just an observation.

I saw all manner of devices ranging from the "wait, how does that work?" to the "oh my God, I am so using that in a book." I even got to try out a few.

The Lightsaber, a zappy shocky electro-stim device, which was interesting. 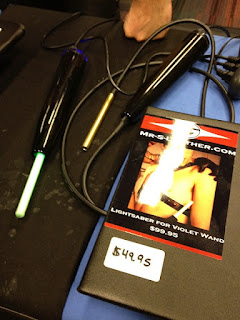 Others, I elected not to try myself. Diamond plate paddles, for example. 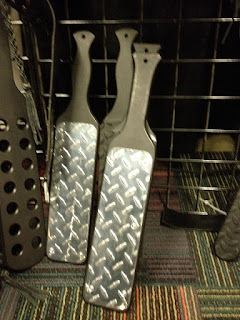 And floggers with chains instead of leather tails. 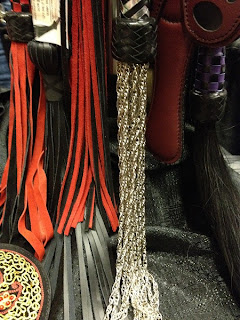 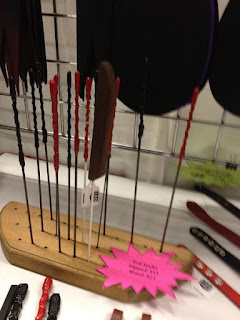 One welt later, I discovered why they're called "evil sticks."

And there were some devices that I lacked the necessary equipment to try even if I wanted to: 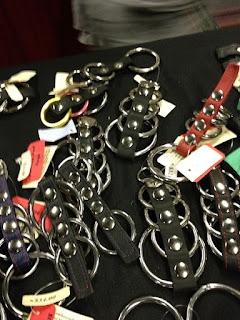 I also ended up buying some books, T-shirts, and artwork, including this gorgeous piece that will be shipped to me very soon: 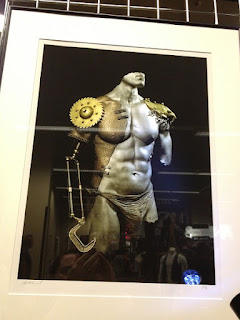 It wasn't unusual for people to stop and watch other people. What they were trying on, what they were trying out, what they were wearing, what they weren't wearing. Being a people-watcher, I found myself watching both whoever had caught their eye as well as the onlookers themselves. And most of what I saw was people watching others out of curiosity or fascination. No nose-wrinkling, no judgment. Maybe some "Oh my God, WHAT is that???", which was invariably followed by "Oh. Interesting." Whether it was someone demonstrating a particular type of bondage, someone trying on a cock ring (I'm not kidding), or a pair of furries walking by, the thing that struck me the most was the lack of judging. Not that it was surprising -- if you're coming to a kink convention to be judgmental, you need to get a life -- just that it's so unusual to see so many people at ease with themselves, their own kinks, and other people's kinks.

And then, after being immersed in this for hours, we returned to the real world, had some lunch, and went our separate ways to return to our own worlds.

Speaking of returning to our own worlds, I would like to offer a small piece of advice before I sign off. If you, like me, live in an uber-conservative part of the midwest, and you've recently attended an event such as IML, and during your attendance spent money on themed apparel, be aware of what you're wearing before you decide to go out for an impulsive trip to Cold Stone.

Because I assure you, there are few ways to gather a more rapid succession of dirty looks in Omaha, Nebraska, than wandering out in public with this on your shirt: 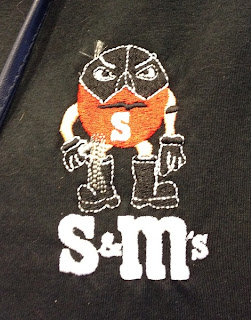