Now Available: From Out in the Cold


Yep, two releases in a row! (and one more on Christmas Day!)

From Out in the Cold is now available from Loose Id, LLC. It's not on the third party sites yet, but I'll add links here as they're available. (Also, the website's gotten a bit of a facelift -- have a look!) 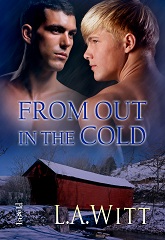 Neil Dalton’s foundation is already cracking. Grief, guilt, and PTSD have ruled his life since a terrible crime tore his world apart last year, and he’s dreading a holiday visit with the family he simultaneously needs and resents. Then someone from his past shows up and rattles that shaky foundation right out from under him.

First a war nearly destroyed Jeremy Kelley. Then his family threw him out when he needed them the most, and now he’s barely holding on emotionally. He spends his last dollar to get to Chicago and prays his former best friend doesn’t leave him out in the cold.

Together, Neil and Jeremy spend the holidays with Neil’s family in their hometown of Omaha. They struggle to deal with families, flashbacks… and feelings that haven’t even begun to fade since their last failed attempt at more than friends. As they try to repair their fractured psyches and rebuild damaged bridges, they rely on each other more than ever, but they can’t deny the mutual attraction that’s existed since before they were both emotionally battered and scarred.  If they couldn’t make it work back then, how in the world can they pull it off now?

Email ThisBlogThis!Share to TwitterShare to FacebookShare to Pinterest
Labels: From Out in the Cold, Loose Id, release info