Some shiny new books are available for pre-order from Riptide Publishing!

Before I get to those, though: I'm getting ready to launch a HUGE book giveaway for readers who've never tried the M/M genre. If you know anyone who hasn't tried it, but might like it, tell them to watch this space over the next week for a chance to snag ebooks by some of the genre's hottest authors!

And back to the pre-orders...

First is Take It Off, the sequel to Quid Pro Quo and written with Aleksandr Voinov. This naughty little short will be available February 25th. 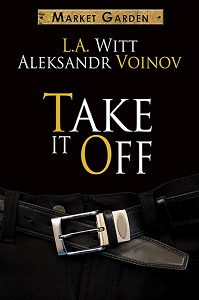 High-end Market Garden rentboys Tristan and Jared have found their niche. Men are willing to pay good money to watch Tristan tease Jared, and the two of them seduce London’s elite with sex and power games.

Except Tristan is less and less interested in getting money out of the johns these days. He wants his partner in crime, and he wants the seduction to be real. But is Jared just in this for the pay?

When Rolex, the john who started it all, returns to Market Garden, the boys jump on the opportunity to service him—and each other—for a fresh pile of cash. Rolex isn’t the only one itching for a rematch, though. Jared’s been waiting for a chance to get back at Tristan for teasing him so mercilessly the first time.

And for a former stripper, revenge is a dish best served extra hot. 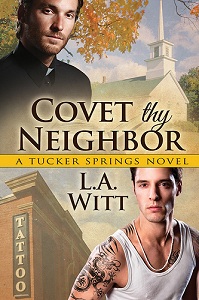 Tattoo artist Seth Wheeler thinks he’s struck gold when Darren Romero rents the apartment across the hall. The new guy is gorgeous, witty, and single, plus he’s just the right blend of bold and flirtatious. Perfect.

Except then Darren reveals that he moved to Tucker Springs to take a job as the youth pastor at the New Light Church. Seth is not only an atheist, but was thrown out by his ultra-religious family when he came out. He tends to avoid believers, not out of judgment but out of self-preservation.

But Darren doesn’t give up easily, and he steadily chips away at Seth’s defenses. Darren is everything Seth wants in a man . . . except for that one massive detail he just can’t overlook. Is Darren’s religion the real problem, or is it just a convenient smokescreen to keep him from facing deeper fears? It’s either see the light, or risk pushing Darren away forever.

While we're visiting Tucker Springs, book #5, Marie Sexton's Never A Hero, is also available for pre-order and will be released May 13th. 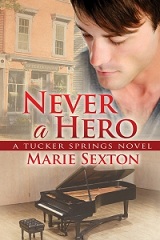 Everyone deserves a hero.

Owen Meade is desperately in need of a hero. Raised by a mother who made him ashamed of his stutter, his sexual orientation, and his congenitally amputated arm, Owen lives like a hermit in his Tucker Springs apartment. But then hunky veterinarian Nick Reynolds moves in downstairs.

Nick is sexy and confident, and makes Owen comfortable with himself in a way nobody ever has. He also introduces Owen to his firecracker of a little sister, who was born with a similar congenital amputation but never let it stand in her way. When she signs the two of them up for piano lessons—and insists that they play together in a recital—Owen can’t find a way to say no. Especially since it gives him a good excuse to spend more time with Nick.

Owen knows he’s falling hard for his neighbor, but every time he gets close, Nick inexplicably pulls away. Battling his mother’s scorn and Nick’s secrets, Owen soon realizes that instead of waiting for a hero, it’s time to be one—for himself and for Nick. 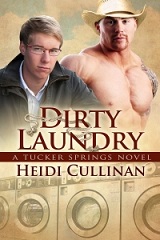 The course of true love doesn’t always run clean. But sometimes getting dirty is half the fun.

Entomology grad student Adam Ellery meets Denver Rogers, a muscle-bound hunk of sexy, when Denver effortlessly dispatches the drunken frat boys harassing Adam at the Tucker Springs laundromat. Thanking him turns into flirting, and then, much to Adam’s delight, hot sex over the laundry table.

Though Denver’s job as a bouncer at a gay bar means he gets his pick of geek-sexy college twinks, he can’t get Adam out of his head. Adam seems to need the same rough play Denver does, and it’s damn hard to say no to such a perfect fit.

Trouble is, Adam isn’t just shy: he has obsessive compulsive disorder and clinical anxiety, conditions which have ruined past relationships. And while Denver might be able to bench-press a pile of grad students, he comes from a history of abuse and is terrified of getting his GED. Neither Denver nor Adam want to face their dirty laundry, but to stay together, they’re going to have to come clean.

And finally, it's back to Market Garden for If It Flies.  The blurb and information about that one will be up very soon, and the book is available March 11th. 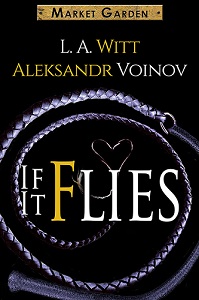 There's more coming, so keep an eye on this blog!

Also, as I mentioned earlier, there is a huge giveaway coming down the pipe sometime in the next week. Stay tuned...
Posted by Lori W. at 10:18 AM