So it would seem that Kindle Alexander and I are release date buddies this week!

Their M/M contemporary, Secret, and my kinky bisexual menage, Kneel, Mr. President, are both available! 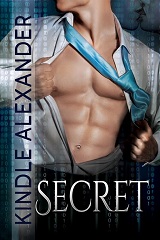 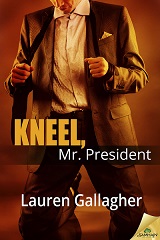 But what are they about??

Here's the blurb for Secret:

Tristan Wilder, self-made millionaire and devastatingly handsome CEO of Wilder-Nation is on the verge of a very lucrative buyout. With tough negotiations ahead, he's armed with his acquisition pitch, ready to launch the deal of a lifetime. There’s just one glitch. The last thing he expects is to fall for the hot business owner he's trying to sway.

Dylan Reeves, computer science engineer and founder of the very successful social media site, Secret, is faced with a life-altering decision. A devoted family man with three kids and a wife, Dylan has been living a secret for years. Fiercely loyal to his convictions, his boundaries blur after meeting the striking owner of the corporation interested in acquiring his company. For the first time in his life, reckless desire consumes him when the gorgeous computer mogul makes an offer he can't refuse.

And here's the blurb for Kneel, Mr. President:


Sworn to have their lover’s back, front, or any other side that needs covering.

Secret Service agent Kent Sinclair, head of POTUS security, thought himself prepared for every contingency. Until the First Lady—a woman who barely tolerates his presence—approaches him with a request that startles the hell out of him.

Carlene Broderick is frightened. With the weight of the country and impending war on his shoulders, her husband, James, is buckling under the strain. The key to helping him cope is the name he calls out in his sleep—and it’s not hers. It belongs to his fellow ex-SEAL team buddy. His ex-lover. Kent.

Without hesitation, Kent plunges into treacherous emotional territory, only to realize it’s not really him that James needs. The Commander in Chief needs to give up complete control in the bedroom.

To relieve that much pressure, Kent and Carlene must work together and declare a truce that rapidly heats up into something more. Something that leaves James caught deep in forbidden territory—torn between his beloved wife and the man he’s never stopped loving.

Warning: Contains three forty-somethings discovering whole new sides of themselves, a rejuvenated marriage, and plenty of kinky fun. All brought to you by an ex-SEAL in a wetsuit, a bisexual President, and a First Lady with a tattoo on her ass.