NOW AVAILABLE IN PRINT: The Distance Between Us (plus a couple of reviews)

I didn't get a chance to post this yesterday, but...

The Distance Between Us is now available in paperback! 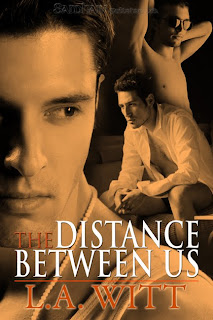 From money pit to windfall…or is it a pitfall?

After ten years together, Ethan Mallory and Rhett Solomon are calling it quits. They’re more than ready to dump their heavy emotional baggage. The only thing they can’t seem to unload is the house. They’re stuck living as roommates with a hefty mortgage hanging over their heads…at least until they can bring in some extra money to pay it down. Solution: rent out a room.

Enter Kieran Frost. Suddenly, the only thing Ethan and Rhett both want more than getting away from each other is getting close to their single, young, hot roommate. Complicating things is the fact that Kieran doesn’t mind the attention from both, and he certainly doesn’t mind sharing.

Their combined chemistry ignites something else that Ethan and Rhett had thought was long dead—the mutual attraction that drew them together in the first place. Except bitter jealousy over Kieran could only push them even farther apart…

Also, With the Band has received a couple more great reviews:

Dark Divas Reviews gave the book 4 out of 5 Divas, and said:

"... if you like a sexy German-speaking protagonist who likes to have incendiary sex with his boyfriend, rock and roll music and well-drawn secondary characters, this is the book for you!"

The entire review is here.

And The Romance Review gave it a reviewer Top Pick rating.

"This was my first book by author L.A. Witt, and WITH THE BAND rocked it out! "

The rest of the review is here.

Email ThisBlogThis!Share to TwitterShare to FacebookShare to Pinterest
Labels: book reviews, Dark Divas Reviews, paperbacks, release info, The Distance Between Us, The Romance Review, With the Band