Getting Past The Great Wall of Don't Wanna

Around 3/4 of the way through every book, I hit a wall. A metaphorical wall, of course, but were it a tangible wall, it would look a little something like this: 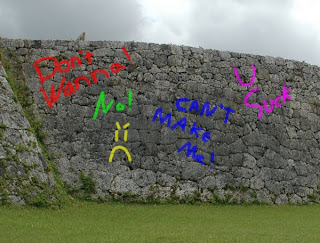 It is at this wall where the doubt demons gather, the wangst wombats play, and the failure fairies do their worst. The book sucks. The story is lame. The characters are atrocious. I'd rather do anything but write it. I...Don't Wanna.

It's also the point when I have nothing left to write except the most difficult scenes. You see, I write out of sequence. I flit all over the manuscript, writing scenes and chapters as they come to me. I have a vague outline, of course, and invariably, there are a few scenes I simply don't feel like writing. Sometimes it's a conversation that's a struggle to work out, or it's an action sequence I'm second-guessing my ability to write (such as a car chase). More often than not, it's a sex scene. Yes, sex scenes are difficult for me to write. I don't know why.

Whatever the case, every book has a few scenes I just don't wanna write. I want them to be written, they're absolutely necessary to the story, but for whatever reason, they're difficult to write. Every time I try to work on them, it's sheer word dentistry, so I go work on other scenes that are more cooperative. Over time, the cooperative scenes wind down and end up in the "Finished Chapters" folder (yes, I have such a folder), and sooner or later -- nearly always at the 75% mark -- I'm down to the stubborn chapters.

Imagine, if you will, your humble author standing in the middle of a dirt road in the Old West, hands hovering above my pistols, narrowed eyes peering out from under the brim of a cowboy hat at my rival who's poised forty paces ahead of me. It's down to this: either the chapter wins, or I do. One of us is going down, gosh darn it, and it is not going to be me.

And here is where writing out of sequence makes things easier for me. You see, sometimes the Great Wall of Don't Wanna is chapter 30, but sometimes it's chapter 10. Sometimes it's chapter 3. When I hit the wall after only writing two other chapters, it's easy to sit there and stare at that wall...unable to move forward, unable to get over/past/under/around/through that wall. I can hear the other chapters on the opposite side, calling to me and begging me to come play with them, but I can't. Because I'm staring at the Great Wall of Don't Wanna. And getting discouraged that early in the game is a good way for me to wind up dropping a book in the Wangstbasket, which is that black hole into which stalled books are tossed and from which precious few ever emerge.

Now, with the way I write, I can get to a wall and decide, "You know what? I don't want to deal with you today." And I go off and write some chapters that are actually team players and want to contribute. Ultimately, I'll finish all those team player chapters, and I'll be down to That One (or Those. Usually it's a handful of chapters, hence happening at the 3/4 mark). I'm staring at the wall, and there's no ignoring it.

But...there's only one important thing waiting for me on the other side:

Yes. The end is near. All I have to do is get past this stupid wall, get over the Great Wall of Don't Wanna, and I'm done with the book. I've made it this far. I've beaten every other gunfighter in the dusty street. I've done way too much work to turn back now (once a book passes the 40K mark, it will get finished if I have to write it in blood).

And lo! Here comes my second wind, and I buckle down and write like crazy. Before I know it, I'm over that wall. Sheer stubbornness and the peer pressure of the "Finished Chapters" population prevail, and one by one, the difficult scenes go down. The book is finished. I win again.

The chapters comprising the Great Wall of Don't Wanna are never easy. That's why they're Great Wall chapters to begin with. But let me tell you, they're a lot easier to write when I know that finishing them means finishing the whole project.

So that's how I get past one of the biggest obstacles in my writing. Do you hit a wall in your writing? If so, how do you get past it?