Six Sentence Sunday - Nothing of a Son

Today, a little snippet from my newest release, Nothing of a Son, where Daedalus, a traveling soldier who is staying with a nobleman during a storm, has just laid eyes on the duke's son, Rauman:


No son of a duke would ever look twice at a man, not if he knew what was good for him. Any soldier who engaged in such perversion would have been sent to the front lines without a shield. Or, now that the war was over, hanged. Maht had no reason to warn me about his son.
A night in the same house as a man that striking. Gods help me, I’d have been safer riding into the storm. 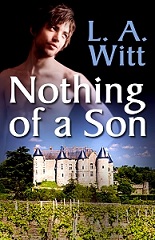 Want to play along? It’s fun and easy!
1. pick a project – a current WIP, contracted work or even something readers can buy if you’re published
2. pick six sentences
3. post ‘em on your blog or website on Sunday

Email ThisBlogThis!Share to TwitterShare to FacebookShare to Pinterest
Labels: Amber Quill, Nothing of a Son, six sentence sunday