Aleksandr Voinov and I have a new book out! Market Garden #5, Capture & Surrender, is now available! (Please note that it is part of a series, but can absolutely be read as a standalone)  Links to be added to my website as they're available, but as of right now, the book can be purchased from Riptide Publishing, Amazon, Barnes & Noble, AllRomance eBooks, and Rainbow eBooks.

And stay tuned tomorrow... Meet Me in the Middle, the next in the Wilde's series, will be available. (This book can also be read as a standalone.) 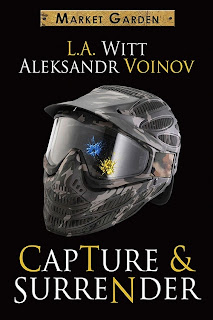 Ever since his partner died, Frank has resigned himself to staying single. He wards off the loneliness by spending time with friends on the paintball field and running his high-end brothel, the Market Garden.

After one of his most lucrative rentboys quits, Frank is thrilled when a gorgeous replacement walks through the door. A former US soldier, Stefan is hot, bold, and perfect for the Market Garden’s clientele, especially those with a thing for camouflage and drill sergeants. He's perfect for Frank, too, except Frank has a rule about not getting involved with his own rentboys.