I'm so thrilled to announce that my transgender science fiction novel, Static, is back! Riptide Publishing has revised it, given it a gorgeous cover, and now...here it is!

Static can be purchased directly from Riptide, as well as on Amazon, Barnes & Noble, and AllRomance. 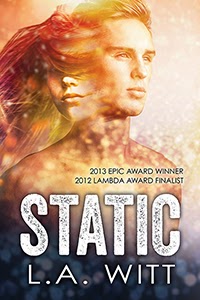 After two years together, Alex has been dreading the inevitable moment when Damon learns the truth: that Alex is a shifter, part of a small percentage of the population able to switch genders at will. Thanks to a forced implant, though, Alex is suddenly static—unable to shift—and male. Overnight, he’s out to a world that neither understands nor tolerates shifters . . . and to his heterosexual boyfriend.

Damon is stunned to discover his girlfriend is a shifter, and scared to death of the dangers the implant poses to Alex’s health. He refuses to abandon Alex, but what about their relationship? Damon is straight, and with the implant both costly and dangerous to remove, Alex is stuck as a man.

Stripped of half his identity and facing serious physical and social ramifications, Alex needs Damon more than ever, but he doesn’t see how they can get through this.