So what's going on with Wilde's (aka The Distance Between Us)?

On Tuesday, the newest Wilde's story, No Distance Left to Run, will be released. I've had a few questions recently about how this book fits with the others in the series, what's going on with the series, etc., so I wanted to take this opportunity to answer them.

The Wilde's series, which is generally called The Distance Between Us series because it all started with the book by that title that was supposed to be a standalone but then... wasn't. A.J.'s Angel came along after that, and Kieran made a little cameo. And then he got his own story in The Closer You Get. And then recurring side character Dale got his own story in Meet Me in the Middle.  So as you can see, it kind of took on a life of its own.

Basically, the series has evolved into something not unlike Tucker Springs. They're all set in the same world (specifically in Seattle, with the night club Wilde's featuring heavily), and sometimes characters cross over into each other's stories, but aren't necessarily related outside of the night club. Wilde's actually made its first appearance in the standalone book, The Best Man, and I guess I was kind of attached to the place, so I keep going back to it. (What can I say? They have awesome Kamikazes...)

Which brings us to No Distance Left to Run, the first co-written Wilde's story, having been written with the other half of my brain, Aleksandr Voinov. 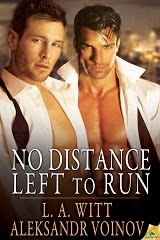 This book does have some cameos by previous characters. Liam is still the shift manager. Kieran is still tending bar. But Chris and Julien? They're new characters entirely. No Distance Left to Run is a standalone (though it will have a sequel), it just takes place in the Wilde's universe.

Will there be more? It's hard to say. Like I said, I keep gravitating back to Wilde's, and now that my co-author extraordinaire has joined me there, it's a safe bet that we'll revisit the place together.

Hopefully I didn't just make it even more confusing. LOL  I hope Wilde's fans will enjoy this newest installment and the new set of characters... and stay tuned for news about the sequel!

No Distance Left to Run is available May 13th from Samhain Publishing.
Posted by Lori W. at 11:52 AM

Email ThisBlogThis!Share to TwitterShare to FacebookShare to Pinterest
Labels: A.J.'s Angel, Aleksandr Voinov, Meet Me in the Middle, No Distance Left to Run, Samhain, The Closer You Get, The Distance Between Us, Wilde's