NEW RELEASES: If It Drives, Guarded, and For The Living

It's been a busy week -- three new titles launched! I didn't want to do a post for each release because that would just clutter everything up, so I've rounded them up for a single post. 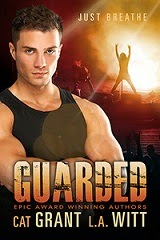 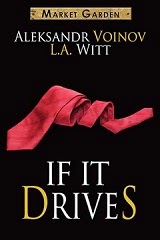 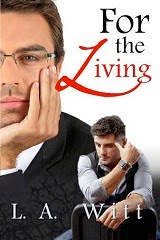 Cat Grant and I are pleased to announce the release of our kinky rock star novel, Guarded, available on Amazon, AllRomance, Barnes & Noble, iTunes, and Smashwords.

On the surface, rock star Jordan Kane has it all. No Rules is burning up the charts and headlining a world tour. His bodyguard doubles as his hot, kinky boyfriend who knows just how to push all his buttons. But behind the scenes, he’s suffocating.

Jase never imagined he’d have a shot at bedding the larger than life rock star, never mind dominating him, but now he’s worried he’s in over his head. Jordan’s kinks run deep, dark, and sometimes dangerous, putting Jase’s desires to both pleasure and protect him at odds.

They might have a fighting chance at finding the safe, happy medium between what Jordan needs and what Jase is willing to give, but there’s one problem: Daniel, Jordan’s childhood best friend, the band’s talented guitarist—and the volatile, hard-partying drug addict. Jordan is determined to save Daniel from himself, but Jase has been there, done that, and desperately wants to protect Jordan from the inevitable heartache of watching an addict self-destruct.

When Daniel goes off the rails again, Jordan calls off the tour to get him help. Tension within the band skyrockets and pressure from the record label sends Jordan into a dark spiral. Now his band—and his life—are balanced on a knife's edge, and Jase is the only one who can pull him back... but only if the echoes of his own tragic past don't push him over instead.

Aleksandr Voinov and I have been busy too, and we're taking you back to Market Garden in the seventh book in that series, If It Drives, available from Riptide Publishing, Amazon, AllRomance, and Barnes & Noble.

If it flies, drives, or fornicates, it's cheaper to rent it.

After driving James Harcourt, his wealthy banker boss, around for a year and a half, Cal isn’t surprised by much anymore. Not even James’s regular trips to Market Garden, London’s most elite gay brothel.

But when James leaves the Garden alone one night and turns to Cal instead, Cal’s floored. After crushing on his boss for ages, it’s his wet dream come true . . . until the awkward morning after. Cal still has a job to do, but he wants to offer more. Yet James doesn’t take him up on it; he keeps Cal at arm’s length and continues his chauffeured jaunts to Market Garden.

As Cal learns what James needs from the rentboys, he tries to fill that need himself. But there’s more to James’s penchant for rentboys than Cal realizes, and it may be one role that Cal can’t fill without overstepping his duty.

And finally, I've re-released my novel, For The Living, and it can be found on Amazon, AllRomance, and Barnes & Noble.

For the last year, Jay Warren has struggled to find the nerve to tell his wife he’s gay. Every time he gets the chance, though, he freezes up. He’s ashamed of hiding it all this time and he doesn’t want to hurt her, and the guilt has been almost unbearable.

Then his wife dies suddenly, and Jay’s conscience threatens to eat him alive.

Funeral director Scott Lawson deals with the bereaved every day, and he’s all too familiar with the inside of the closet. He offers Jay some much-needed compassion and understanding, and from that connection comes a friendship that quickly—perhaps too quickly—turns into something more.

But are grief, guilt, and loneliness the only things tying them together? Or will Scott get fed up with being used as an emotional crutch before Jay realizes what he has?

This book was previously published.